Athi was born in Mount Frere in the rural parts of Eastern Cape where he was introduced to cooking at a very young age. One of three brothers, his mother raised him to be independent and this meant learning to cook and take care of himself early in his life. But it was in his Grade 10 Consumer Studies class that Athi’s real passion for cooking started taking shape. In these classes, he would cook for marks and the realisation dawned on him that this could be a career.

In 2012 Athi enrolled at the Cape Town Hotel School, majoring in Professional Cookery. After completing internships at Southern Sun Cape Sun and La Mouette, he continues his studies part-time and is currently working towards his Master’s Degree in Tourism & Hospitality.

Athi is currently Chef de Partie at SunSquare Cape Town City Bowl and aspires to become a head chef, and possibly owning his own restaurant in years to come.

Jo-Ann was born in Cape Town and grew up in Mitchell’s Plain a shy, introverted girl quite content with her quiet life.  After matriculating from Westridge Senior Secondary School she commenced her studies in Nature Conservation at Cape Peninsula University of Technology but realised after first year it was not her calling.

She discovered her love for cooking while taking care of her small family, and in particular she developed a passion for baking.  She completed her Professional Cookery course at CPUT and was an intern at many leading establishments around Cape Town, including the Cape Town International Convention Centre during the 2010 FIFA World Cup.  This was an exciting time for Jo-Ann as she interacted with people from all over the world.

Whilst continuing her studies at the Tourism Business Institute of South Africa, she was an intern at Southern Sun Waterfront.  She was mentored by then-Chef de Partie Audrey Isaacs and grew to love pastry work during this 18-month internship assignment.  After graduating, she joined the hotel as a Pastry Commis Chef, later moving to Chef de Partie.

Jo-Ann continues to experiment and explore baking in her spare time at home and is looking forward to an exciting career doing what she loves.

Sandi is usually heard by his bellowing baritone laugh before he is seen. And when you do see him he has a proud beaming smile to match. He loves nothing more than making happy guests by chatting about the surrounding wine regions, local gins and making cocktails.

His story starts almost 9 years ago as a young man living in Gansbaai, where he had grown up. One day a friend invited him to join the Green Team for some temp work, an initiative of the Grootbos Foundation focusing on clearing alien plants and rehabilitating the land. After seeing his ability to work hard and focus on the job at hand, they offered him the position full time. For 2 years he did this important work, connecting with the land and plants on Grootbos and further afield.

On completion of his contract he decided to keep working with his hands and did freelance construction work for 3 years.  When he found himself living in the small town of Stanford he approached Springfontein Wine Estate and secured himself a job working alongside the horticulturist and viticulturist: planting vines, pruning, tending to the soils and laying irrigation.

One day he saw a poster at the taxi rank – the Grootbos Foundation was offering to educate interested students in the hospitality industry, and he jumped at the opportunity. The focus was on housekeeping and bartending. Grootbos’ sommelier also gave a lecture and after that Sandi knew he wanted to work at the bar and learn more about wine. He was offered a position with Grootbos in the lodge and 3 years later he enjoys it more than ever – constantly looking to perfect those cocktails, gain more knowledge about wine and all the different alcohols, and chatting with guests who visit from around the world.

Graeme grew up in the small town of Malmesbury in the Western Cape. “I was always interested in cooking”, he says. “As a child I used to help my ouma make Malva Pudding in the kitchen, measuring the ingredients and stirring the mixing bowl”.

As a young man of 19 he came across a poster for the Ikusasa School of Cooking, calling for applications for students interested in pursuing a career in the hospitality industry. He was accepted and so begun his journey in the culinary world. Working in the kitchen and learning about cooking was a lot tougher than Graham had expected, but he persevered and applied himself to his studies, and at the end of the course he was declared the top student.

As a result of his hard work he received a three year bursary to study at the International Hotel School, finishing with an internship at the prestigious  4* Le Franschhoek Hotel & Spa.

At the ambitious age of 22 Graham  now finds himself as the Chef Du Partie of Grootbos Private Nature Reserve, a 5* luxury eco-lodge in the Overberg. Cooking has taught him so many essential life and career skills but if he had to simplify it: it’s taught him how to multi-task, what hard work is really all about, how to work under pressure and how to work fast.

Stories have always captivated Sasha. Like the process of making wine and the experience of enjoying it, they have a beginning, middle and end.

As a young girl she would spend hours lost in books or acting out plays to any willing audience. It was this fascination with storytelling and love of language as a cultural expression that brought her to study journalism after school. As luck would have it, her first job as a qualified journalist was at the previously published Wine Magazine. She slurped up every opportunity to taste any wine she came across, explored vineyards and cellars alike and listened with captivated ears to tales told by winemakers.

On her journey she was also the manager of Caroline’s Fine Wine Cellar, did sales and marketing for a handful of wine farms and planned and hosted numerous events. She also managed to recently squeeze in a year travelling Europe whilst learning to farm, something she believes is an essential life-skill for the future.

“I was born and educated in Zambia,” says Solomon, “but I wanted to travel, to meet people and experience new cultures. After some travelling I found myself in the rainbow nation filled with people of different cultures, this is where I decided to set down my roots and picked up my marketing studies. It was during this time I started working as a waiter in a family restaurant.

I enjoyed learning about the food and wine so much, the different notes on wine and how they pair so well with specific dishes. This curiosity led me to a job at a Wine Estate in Stellenbosch. I spent this time enhancing my knowledge of hotels, cuisine and wine.

After some time passed I decided to move to the city and found my new home at Radisson Blu Hotel Waterfront where I’ve been for the past two years. My love and passion for the job comes from spending time with our loyal return guests and meeting the new ones.  I take pride in ensuring all our guests receive the very best service and that they have only the best guest experiences.

At the Radisson Blu Hotel Waterfront, I am constantly learning. Executive Chef Norman Heath loves sharing knowledge with us, like why he pairs certain flavours with each other and Dominique F&B Operation Manager, encourages us to learn about each wine so we are able to suggest the perfect pairing for our guests.

I have so much still to learn, but I hope to one day run my own restaurant, where I can share my passion with the younger generations and hopefully guide them on their paths.”

Grant Thomas was born in Somerset West in Cape Town. He attributes his love of food to his Christian beliefs, his faith and his family. His grandmother whose Sunday roasts were always a favourite, to his mom who enjoyed the traditional methods and to his dad who loved being the weekend adventurous cook.

I knew early on that I wanted a career in food. Aside from keeping an eye on what and how my family cooked, I watched legends such as Keith Floyd, Antony Worral Thomson, Rick Stein and many more creating art forms from food during the 90s. That’s when the flame ignited. After I completed my matric at Hyde Park in Johannesburg, I came back to Cape Town to study at Zewenwacht Wine Estate Institute of Culinary Arts

I have been in this industry for 19 years and have been blessed with many amazing opportunities. One of these was immediately after my studies in 2000. I was a commis at Protea Hotel Wanderers where I got to learn under the guidance of Executive Chef Allister Esau who has to this day played an enormous part in my career.

Other stand-out opportunities include working abroad in the Caribbean, in the Turks and Caicos Islands, at the Point Grace Hotel – one of SA’s most prestigious hotels, at private game lodges and large casinos such as the Michelangelo Sandton, the Saxon Hotel and Spa, Mount Grace Boutique Hotel, One&Only Cape Town, Emperors Palace, Singita private Game reserve and many more. Working at so many different places, each with its own way of doing things, I have been introduced to different methods of not just cooking food but also management methods – both good and bad. It has truly given me a lot of insight as to how kitchens should be run.

Initially, as a young chef, I tried mimicking the more established and better known chefs of our time. It’s only over the last seven years can I say I’ve found myself and my style of food. I now better understand the balancing of flavours, textures, colours, the visual aspect and how they all come together. When designing dishes, I try not to put a spotlight on one thing in particular – I believe that every element on the plate and every ingredient has an important role to play.

I am currently working at the Radisson Blu Hotel Waterfront Cape Town under Executive Chef Norman Heath.  I feel that this is where I can make my mark on the industry under the selfless considerate style of management of Chef Norman who always wants his staff to thrive.

I am entering this competition as a baker. Not because I am an expert in breads, but because I want to take up a challenge that puts me out of my comfort zone. Whether I come first or 10th, taking the leap in competing is the victory on its own.

We salute our winemakers on making South Africa on 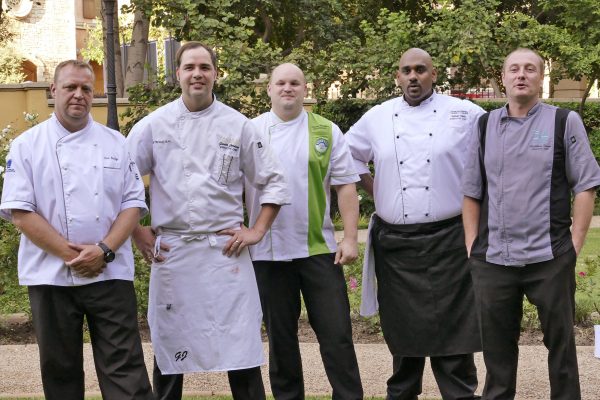